Sergeant Tibbs is a tabby cat from 101 Dalmatians. He is the sidekick of the Colonel and also an ally to Pongo and Perdita, as he helps the couple rescue their puppies.

Tibbs is considerably the Colonel's most loyal rank member (and most likely best friend). As sergeant, whenever he is given an order by a superior officer, he will always be quick to follow that instruction. Tibbs is also shown to be easily startled when he is awakened by the Captain's loud neighing. However, like the Captain and Colonel, Tibbs has been shown to be courageous and resourceful in rescuing the puppies from Cruella.

Tibbs is in the middle of a nap when he is awakened by the Captain with an urgent message from London. Tibbs and his friend Colonel learn about the fifteen missing Dalmatian puppies. Tibbs recalls about remembering hearing puppies barking over at Hell Hall (the Old De Vil Place). He and the Colonel travel to the manor. Tibbs enters investigating the area and soon finds 99 Dalmatian puppies, including the original fifteen. Before Tibbs can save the children, Cruella de Vil's minions, Jasper and Horace, find the tabby cat and begin to attack. Thankfully, Tibbs escapes the Baduns. Later on, Tibbs and the Colonel try to make contact with Pongo and Perdita, the parents of the missing fifteen pups, but to no avail. Out of nowhere, a car makes it's way to the De Vil Place, resulting into Tibbs and the Colonel going to investigate yet again. This time around, Tibbs learns the diabolical plan of Cruella De Vil: to make dog-skinned coats. Tibbs successfully sneaks the puppies out the main living room, but their disappearance is discovered by Jasper and Horace, and a chase follows. Tibbs and the puppies are soon cornered and nearly killed until Pongo and Perdita burst in and battle the Baduns. Tibbs and the puppies escape with the Colonel back to the barn. There, Tibbs and the Colonel watch the happy reunion, but it all takes a turn for the worst when Jasper and Horace appear once again. The Dalmatians escape, leaving Tibbs, the Colonel and Captain to battle the Baduns. However, their battle leads to Jasper and Horace finding paw prints of the Dalmatians.

Sergeant Tibbs is a cat who works directly for Colonel, though due to his long and loyal service towards the elderly canine, he has found himself a high rank in the Bark Brigade, where he often performs administrative duties in order to keep things working as smoothly as possible. Whether it involves him helping Colonel perform first aid on an injured cadet, or keeping clock during assigned races and events, Sergeant Tibbs has proven himself time and time again that he is a capable officer who has performed many accomplishments for the Bark Brigade. Despite this, however, Sergeant Tibbs finds himself hated by Lieutenant Pug, who considers him to be a spy in the feline army who is secretly trying to bring forth the Great Cat Invasion, though Sergeant Tibbs tends to ignore Lieutenant Pug's remarks whenever they are made. However, there are instances where Sergeant Tibbs loses his composure and he has said several things to Lieutenant Pug about his derogative remarks, though Lieutenant Pug seldom speaks back to Sergeant Tibbs because he realizes that he has Colonel's blessing. Despite the fact that he is a cat, a vast majority of the dogs in the Bark Brigade welcome his assistance, and the Dearly Dalmatians realize that he's always got their back, as if Lieutenant Pug ever does anything that truly abuses his power, Sergeant Tibbs will keep Colonel well informed, so that the situation can be resolved without conflict.

102 Dalmatians: Puppies To The Rescue

Tibbs appears in the video game 102 Dalmatians: Puppies To The Rescue, and is voiced by Michael Gough. In the game, Tibbs greets either Domino or Oddball in two levels. One of which is in the toy store, where he tells the player how to operate shooting devices and also the train and elevator. He later appears in "DeVil Manor," where he sabotages a clock to wake up Horace Badun. Domino/Oddball then lead Horace underneath a chandelier, where Tibbs causes it to drop on top of him. 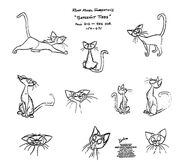