Roger Radcliffe (or Roger Derek Dearly in the live-action version and television series) is a musician who is also the owner of Pongo in the 101 Dalmatians franchise. He was voiced by Ben Wright in the first film, Jeff Bennett in the series, Michael Gough in the Animated Storybook, and Tim Bentinck in the sequel film and portrayed by Jeff Daniels in the 1996 live-action film. His singing voice, however, was provided by Billy Lee in the first film.

At the start of the film, Roger and Pongo lived in a bachelor flat; however, Roger was married to his work, writing songs on love (something, according to Pongo, he knows absolutely nothing about). He's intelligent enough as Humans go, but Pongo feels if finding a mate was left up to his human, they be bachelors forever.

When he takes Pongo for a walk in the park, he accidentally gets tangled up with Anita and her dog Perdita. When they fall in the pond, the two hit it off after Roger (unknowingly) offers a wet handkerchief to Anita, since her own one is wet too.

The two soon marry, along with their Dalmatians and they move into a flat near the park. He creates a melody and when Anita's old school friend Cruella de Vil arrives, he thinks up of the lyrics, turning the melody into the song; "Cruella de Vil", which he teases Anita with.

When the Puppies are born, Roger is just as nervous as Pongo is, easily getting startled in the wait. He is the first to congratulate Pongo on his puppies. However Nanny presents them with a still-born pup, at first Roger is upset over this, but then thinks of massaging the pup, which brings it back to life. When Cruella arrives to buy the puppies her pen doesn't work, but after shaking it about, ink splats in Roger's face giving him a Dalmatian appearance too. He then stands up to Cruella, with a stutter and states that they're not selling the puppies.

When the Puppies are abducted, Roger puts Cruella as his #1 Suspect, when Cruella calls up, Roger assumes she's calling to confess before demanding down to the phone she tell them where the puppies are.

At the end his song reveals to become famous but Roger turns it off, even though it was his first big hit, and he became rich because of it. Then when Pongo and Perdy and the puppies return, Roger is able to add together how many Dalmatians there are overall and they celebrate by singing a new song "Dalmatian Plantation", which shows during the singing, the neighbor dogs bark to the tune of Dalmatian Plantation. It is possible that Dalmatian Plantation becomes more famous and better than "Cruella de Vil".

In the first movie, he is shown to smoke a pipe.

He is seen in the sequel packing so the family can move to country. When he comments that he's seeing spots (due to all the puppies), he gets the inspiration for a new song, later adding it on to "Dalmatian Plantation". When Anita asks if he's playing or packing, he responds that he's "playing and packing."

When the family arrives at the Farm, he pushes the piano into a run down house, commenting with a bit of work, it'll be as good as new. When he asks where the music room should be, the piano falls through the floor, Anita commenting that they just found it.

When the paper arrives, he ignores it at first to work on his song; however, after chickens fall into the music room, he discovers from the paper that Patch is still in London. He, Anita, Pongo and Perdita drive off in search for him. He is seen after the climax of the film, happy to see that all the puppies are okay.

During the credits, it says his song "Seeing Spot" hit the tops, and he receives a music award for it.

In the Disney Studio album adaptation of the "animated" movie, Pongo says that at the time of his meeting with Perdita and Anita, Roger was only turning just twenty-three years old.

Like the novel, Roger's surname was named to be Dearly. He is an American in this version. At the start of the movie, however, he lives with Pongo in a British flat, Pongo acts somewhat like his Mother, by getting him out of bed, turning on the shower, coffee pot and computer before bringing the milk in. In the park, Roger hopes to make a Sale fearing it'll reach the point where he'll have to eat Pongo's table scraps, he assures Pongo that he was exaggerating. Roger admits he tends to get nervous and when he's nervous he says things he shouldn't say or do and the next thing; freelancing.

Roger creates video games, which are commented to be good; but his main problem is that he is unable to think up of a good villain, which causes him to be turned down.

On the way home, Pongo sees Perdita and chases after her, with Roger on the bike attached to him. One wild chase through London later, Roger is flung from his bike and into the pond at St. James Park, loosing his shoe in the process. As he tries to grab Pongo, Anita arrives, demanding he let the dog go, before hitting him in the face with a bag of bricks. It turns out he had accidentally grabbed Perdita, mistaking her for Pongo.

When he takes Pongo away, he comments how "Fools aren't born; pretty girls make them in their spare time." He, however, shows some genuine interest in Anita, denying it though to Pongo. When Perdita causes Anita to crash into the pond, Roger rescues her from the waters and attempts to give her rescue breaths (however, he couldn't do it right, with Anita's arms round his neck).

Over tea, Roger asks Anita if she wants another cup of tea, however tea comes out as "marriage". Anita replies "(She does)" and the two begin to make out, the clothes on the fireplace, catching alight at the same time.

After they (and their respective dogs) are married and that Anita's pregnant, Cruella arrives and they are introduced. Roger tries to start on good grounds. Cruella doesn't make such the effort. When the Puppies are born, Nanny presents them with a stillborn pup, Roger massages it and brings it back to life. The puppy is named Lucky.

He then stands firm with Anita when refusing to sell the Puppies to Cruella.

Later, when the puppies' collars arrive, as he puts on Dipstick's and Two-Tone's, they both seem to start licking his face.

When the puppies are abducted and Nanny says the police will do all they can, Roger doubts that they'd be able to find anything, yet alone even start looking.

Roger attempts to chase after, Pongo & Perdita when they go off to get their puppies, but isn't able to keep up. Nanny assumes it's so they can look for the puppies, and Roger names Cruella as his prime suspect. He causes Anita to remember the Dalmatian coat design she drew months back, realizing a motive for Cruella.

When the Police arrive with the Dalmatians, Roger asks if there's anything they can do to repay them and the police answer by saying that the other puppies need a home. Roger seems willing to take them in and when Anita notes they don't have enough room, Roger states they'll get a bigger place.

Upon seeing a newspaper talking of Cruella's arrest, Roger gets the idea for a villain and creates "Escape From Devil Manor" with Cruella as the antagonist.

The game is a success and they move into a bigger home in the Country, where their daughter is born.

In 101 Dalmatians: The Series, Roger creates video games for his computer game company "kindly" sponsored by Cruella. Roger truly hates Cruella, but has to put up with her so that Anita does not get fired. Instead he puts his hatred of Cruella into his computer games such as creating a game called "The Cruellantor" or in his "Barkio" game, makes the villain entirely based on Cruella.

Other occupations he has are on two occasions: song composer like in the animated movie and sometimes working the tractor on the farm. He, however, isn't very good at fixing things, usually causing the entire farm to panic whenever it becomes apparent on what he's about to fix. He also has the hobby of building model train set, showing high concern when he finds it's missing along with commenting how hard it is to replace G-gage train tracks.

He claims when he was young to have picked up various pieces of rock or lint, to which he kept in a box called "Roger's Big Box of Treasure". It is stated he had his appendix taken out, as he shows a piece of it to Cruella whilst going through said box. Another part of his childhood would be that he owned a Junior Houdini Hocus Pocus Magic Kit. The hat that came with it was later torn when he used it to cover up his bald spot.

Unlike the animated movie, Roger does not smoke a pipe, Lucky and Anita noted in "Smoke Detectors" that Roger stopped smoking his pipe cold turkey; however, he had difficulty doing so. To help, he got a self-help sleeping cassette tape to stop smoking; on the other side there was a dog training tape.

Roger appears to be a big fan of baseball too, particularly in the team the Bittleburg Bivalves, which he marks seeing their spring training as one of the highlights of their vacation. He claims that he played for a championship team, though Anita notes he was five years old in a team called "The Pilwater Peewes".

Roger and Anita have a niece named Amber, who looks just like Anita, suggesting that Amber is likely from Anita's side of the family.

Roger is mentioned in the Descendants novel, Return to the Isle of the Lost, where it explains that he and Anita are helping the Darling parents (from Peter Pan) to chaperone the castle-coming dance.

There have been multiple spin-off books to the animated film, some of which take place when the Radcliffes and Dalmatians buy a place in the country.

In this plantation, it says that Roger takes up gardening. One time is to win a competition, and another time is to grow vegetables. However, the pups keep digging the garden up.

For the contest, Roger at one point felt forced to lock them up in a pen so they wouldn't dig, but felt guilty in doing so. Nanny was able to fix this by suggesting she take the pups on walks to large fields so they can dig as much as they like there and be too tired to dig up Roger's garden. His garden later wins the competition.

When planting vegetables, Roger was able to get the pups to not dig up his vegetables by instructing them to guard them from any potential critters or birds. A position which has the puppies later capture Cruella.

Roger was also named fire chief of the volunteer fire department in the town nearby. In the Book Little Squirts, he is still able to write his songs at that job, since not many fires happen in the area. 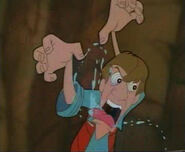 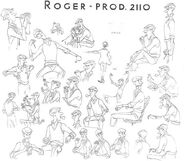 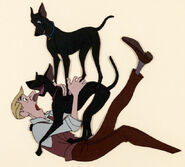 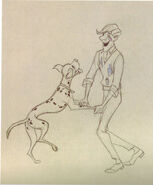 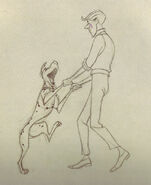 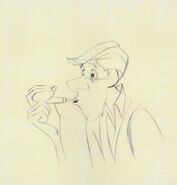 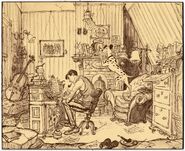