Nanny is a caretaker for the Dearlys and the Dalmatians. She appears in the 1961 movie One Hundred and One Dalmatians, its sequel, and live-action film. She also works on the Chow Tower in 101 Dalmatians: The Series and is quite inventive when it comes to creating new inventions to ease her work, such as a catapult to launch her laundry onto the clothesline. She is a combination of the two characters: Nanny Cook and Nanny Butler in the books; however, according to some sources, she keeps the "Cook" surname.

In One Hundred and One Dalmatians, Nanny is brought on as a cook and housekeeper after Roger and Anita settle down in a new apartment near the park. Within only a few months, she becomes very close to the family, and is especially joyful when the puppies finally arrive. When Cruella visits to offer a buying price for the newborn puppies, she joins Roger and Anita in standing up to her and subsequently to refuse her offer. Nanny is primarily responsible for watching the puppies when Roger and Anita are out, usually to walk Pongo and Perdita. During this time, she grows quite attached to the young dogs. One night while Roger and Anita are out, Horace and Jasper arrive to steal the puppies for Cruella, posing as electricians to gain entry. Nanny is not fooled by their ruse and refuses to let them in with the masters of the house gone. The two crooks ram their way into the house and although she puts up a tough fight, Jasper holds her in the attic while Horace abducts the puppies. After the two thieves leave, she runs downstairs expecting to see the family valuables gone, but discovers the puppies have been stolen, to her horror. She runs out into the street hysterically calling for help.

Apart from being seen in a newspaper photo, sitting solemnly by the vacant puppy basket, Nanny isn't seen again until the end of the movie, just before the puppies return home at Christmas. She serves tea to Roger and Anita as she weeps over remembering the puppies, but hurries at once to open the door when she hears the familiar sound of barking. Even though the dalmatians scatter ashes and soot all over the apartment and its inhabitants from their disguise to hide form Cruella, Nanny is never happier to be reunited with them and dusts them off so they can be recognized.

In 101 Dalmatians II: Patch's London Adventure, she is first seen calling the puppies for dinner. During this scene, she tells Rolly that he may be allowed to eat one bowl at a time.

When Roger and Anita Radcliffe move to the farm, she continues her duties as their maid, she picks up the newspaper and puts it on the laundry basket, but puts it down near the hole into the music room when she hears the kettle boiling. When Horace and Jasper come to steal the puppies, Nanny hears the Kanine Krunchies theme, playing from the van. She confronts the Baduns by hitting them with a frying pan; however, they chase her through a pig sty. The Baduns tie Nanny up and lower her down a well.

She is later rescued by the police, and she arrives with them to identify the Baduns as the one who stole the puppies. The Baduns point out that Cruella made them do it.

In 101 Dalmatians, it is said that Nanny use to be Anita's nanny whilst recalling that Anita was always good at drawing when she was a little girl and is now please to be working for Anita again, as she starts a family of her own. She is the first to realize that Perdita is expecting puppies and when she notices Anita demonstrating all the same signs, she finds out Anita is pregnant too.

When the puppies are born, she brings the towels downstairs for Perdita and informs Roger and Pongo about their arrival. When Roger brings a still born puppy back to life, she gives it the name Lucky. A few weeks later, Nanny arrives home from shopping to give the puppies their collars.

On the night, the puppies are abducted, she was putting some unfinished dog food in a pot. When Horace and Jasper show up, she tries to fight back, punching Horace in the face, but they lock her in a cupboard under the stairs.

During the "Twilight Bark" scene, Nanny is seen to bark in her sleep.

When Pongo and Perdita run off to find the puppies, Nanny is able to guess why they did so and agrees with Roger's suspicion of Cruella being the culprit. When she notes that dogs can smell ill intention, Anita suddenly realises Cruella's motivation.

When the puppies are returned and the Dearly's are offered to keep them, Nanny figures they have seventeen already, so where's the harm with a few more?

She moves in with Roger, Anita, and the Dalmatians when they move to the country.

Nanny appears as one of the main characters in 101 Dalmatians: The Series.

In "Home is Where the Bark Is", she is mugged whilst walking the puppies, but Lucky retrieves it. This act is what convinces Roger that it's time to move out of the city and to the country.

She does numerous chores on the farm, such as using a bicycle attached to the Chow Tower to pour out the pups' kibble.

She is also given mention to her family. In "Southern Fried Cruella, it is said she has a sister called; Franny, whom she later visits in "Leisure Lawsuit". Another family member she mentions is her brother, whom she tells Horace is a cop.

The series also establishes a relationship between her and Horace, first spawning when Horace tells Nanny that she has beautiful eyes in "Home is Where the Bark Is". In "Frisky Business", Horace tries to help her with the laundry, but she turns him down. However when they work together to get Lucky, Rolly, Cadpig, Spot, and Cruella's car back, Nanny gives Horace a kiss on the cheek. Horace then makes her a Valentine cake in "Valentine Daze", Nanny slams the door in his face when he greets her, but once she learns what Horace intended to give her, the two have tea together.

Another person who falls in love with Nanny is the Baron in "Cupid Pups". He claims when he tasted Nanny's boiled radish in pickle sauce, he knew she was the one. He proposes to her, but she turns him down, since someone's got to look after the Dearlys. The Baron takes it easy, figuring it's for the best, but requests some radishes to go.

Nanny has also achieved the honor of "Humanitarian of the Year". 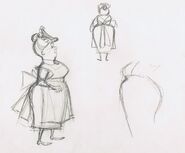 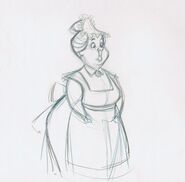 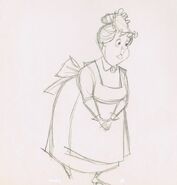 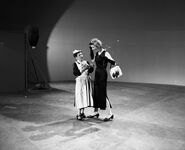