Malevola de Vil is Cruella de Vil's mother from 101 Dalmatians: The Series. She is voiced by Tress MacNeille.

Malevola neglected Cruella when she was young, always spending Christmas away and even seems to hint not remembering her own daughter's name. Due to this neglect, the young Cruella wanted a Dalmatian puppy to give that love and affection, her mother never made. A buildup of neglected Christmas is what caused Cruella to go mad.

Malevola shows little love for her descendants, except for Ivy de Vil. She has two big, fierce dogs named Cerberus and Cujo. She appeared in the episode "Coup De Vil," where she called a family reunion at Villa De Vil to give the other De Vils a chance to get the Dearly Farm where Cruella had failed. It is revealed that the only reason Cruella wants to buy the farm is to please her mother.

After many failed attempts, Cruella snaps and stands up to her mother by lamenting about all that she hates about her. Her ranting, however, pleases Malevola, as she believes it takes some guts to stand up to one's own mother. As a result, this finally earns Cruella her mother's respect. 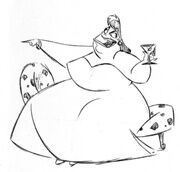