Horace Badun is one of Cruella's henchmen in the 101 Dalmatians franchise. His name in the books was Saul Badun and was renamed Jinx Badun in the musical.

During the first novel, the Baduns are Cruella's henchmen along with caretakers to her Suffolk property. They are seen watching television at Hell Hall, their favorite show being What's My Crime?, the two debate on how they could get on that show, before realizing that the theft of nearly 100 Dalmatians would be good enough. Cruella orders them to have the puppies killed and to assist her husband during the skinning.

The Baduns play a minor role than they do in the films.

In the closing of the book, they are arrested and are hoping to make an appearance on What's My Crime? sometime soon.

Like in the book, the Baduns are seen watching television. Unlike the book, this does not take place in the kitchen. In the first film, they are the ones who steal the puppies while pretending to be from the electric company. Their moving van crashes, along with Cruella's car.

In an early draft of the film, Horace would have been called Saul, as he was in the original novel, and that he and Jasper are two of seven brothers. In the animated 101 Dalmatians, it shows they are just two Badun brothers, rather than seven.

In Patch's London Adventure, Horace is imprisoned with Jasper after the events of the first film. Later, Cruella releases them from prison to steal the Dalmatian puppies again. Unlike the books, Horace and Jasper reform and open up their very own ladies clothes shop.

In the films, Horace is usually able to guess to a tee what tricks the Dalmatians are doing by attributing to them having human-level intelligence; however, both times this is dismissed by Jasper who says that "dogs ain't that smart."

In the live-action film, Horace is played by Mark Williams. In the "novelization" of the film, it is said he can have a precise memory, if given a good whack on the head. When chasing the pups through Hell Hall, Wizzer tricks Horace to slipping on some ice and falling into an icy pond.

In the television series, however, they wear different clothes and are "The H and J Concepts Company". In Horace's own words, "[They're] consultants on parole."

Horace is usually portrayed the be the nicer one of the Badun brothers, even at some points happily greeting some of the Dalmatian puppies. In "The Fungus Among Us", when he and Jasper are driving a bulldozer, while Jasper has no trouble with running down Lucky in the process, Horace cannot bear to run down a little doggie and stops the bulldozer, saving Lucky.

Horace is pretty easily convinced. When Jasper tells him that he didn't know anything, Horace repeats that for the rest of the episode.

In the series as well, Horace is shown to have a crush on Nanny, and on some occasions, she returns the favor.

In the Musical, Horace is once again renamed to Jinx and is more like his Novel incarnation. Together, he and Jasper sing the song number "Crime of our Lives"

Whilst Horace and Jasper can be seen amongst one of the guests in House of Mouse, the two also make a cameo appearace in the Disney series, Bonkers, as part of a police line-up.

Horace and Jasper also appear for a minor speaking role in the Disney short, The Saga of Windwagon Smith, where they are seen dressed in cowboy attire, pointing out the mayor of the town while jumping from the wind wagon.

Pictures of both Horace and Jasper appear on Gosalyn's wall in an issue of the Darkwing Duck comics. 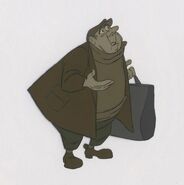