Hansel is a Siberian husky who is a supporting character on the TV series 101 Dalmatian Street. He is the crush of Dolly.

Hansel is friendly and has a strong foreign accent. Blue-eyed and dreamy, Hansel is always leaving Dolly feeling tongue-tied. Flirtatious, cool and popular, Hansel is blissfully unaware that he is Dolly's crush.

He also shares a love of the arts with his poetry buddy Dylan (though, is a bit of a hipster, commenting on how he finds hip-hop too mainstream and finds chasing cats to be so cliche) and enjoys getting into character in the role play board game Poodlewolf.

He has also been seen to practice yoga with the feline, Constantin.

Hansel is a black-and-white husky with light blue eyes with a bluish-gray collar that has a tooth-shaped dog tag.

Hansel first made a small appearance as a part of the chain of the World Wide Woof to relay Dylan's message to his sister Dolly asking how she was doing taking care of their younger siblings on her own in "Walkies on the Wild Side".

He made his first official speaking appearance in "May Contain Nuts", observing Delgado and Dolly doing stunts at the skate park with the Dalmatian family and several other dogs.

In "Winter Funderland", Hansel comes to Dolly's Snow Party, complimenting how all the snow reminds him of home, implying that he was born in another country before moving to London. He is seen with the other Dalmatians, giving them sleigh rides about the house. Soon, when things become too cold, he helps Dylan bring the back up power generator to the heater.

In "Poetry Scam", Hansel is interested in Dylan's poem which Dolly recited in a panic in an attempt to impress him. He ends up inviting Dolly to a poetry performance later that night. In the end of the episode, he is seen walking off with Dylan speaking more about poetry.

In "Girls' Day Out", Hansel is at the Animal Spa, practicing Yoga with Constantin. Dolly accidentally trips over Hansel, who then tries to remember her name.

He is seen as one of the contestants for the tenth annual Nose Off in "The Nose Job", where is able to get the scent of pepper in the first round, but later mistaken a walnut scent for almond. He is later seen when Dylan tries to send a message about saving Diesel on the "World Wide Woof", the signal gets messed up by the time it gets to him, however, and he thinks the message is about shaving a weasel, and then about scratching evil, when Dylan tries using the "World Wide Woof" again later in the episode. 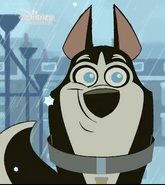