Dorothy is a young Dalmatian puppy who appears in 101 Dalmatian Street.

Dorothy is the youngest out of Doug and Delilah's puppies, and because of this, she appears to behave in a very toddler-like manner. She has not yet learned how to communicate verbally but is able to understand what others are saying, usually giving non-verbal responses if they ask her something.

Dorothy also enjoys gnawing on things (most likely because she is still teething), and her basket is surrounded by chewed-up toys and sticks. Dolly and Dylan have commented on how Dorothy never forgets a stick.

Dorothy appears in the short "Merry Pups", where Dolly, Dizzy & Dee Dee attempt to get her present. But Dylan is guarding it to make sure it is not opened until Christmas Day. While this leads to her present being reduced to a pile of ash, Dorothy was actually more focused on the ribbon her present was wrapped in, and plays with that.

She also plays a notable role in "Boom Night", where she is first seen trying to gnaw on a stick in a bonfire. Later, when Dolly sneaks out of the house, Dorothy is seen watching this. Dylan then thinks that Dorothy must have followed after Dolly, but when he finds Dolly, Dorothy is not with her. They then return to the park, thinking Dorothy must be by the bonfire. It turns out Dorothy was on the roof of the house, with Dolly and Dylan rushing back to cover her ears before the fireworks go off. 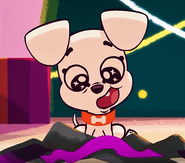