Dorothy Gladys "Dodie" Smith (May 3, 1896 - November 24, 1990) was an English novelist and playwright. Smith is best known for her novel The Hundred and One Dalmatians featuring Cruella de Vil. Her other works include Capture the Castle and The Starlight Barking.

Dorothy was born on May 3, 1896 in Whitefield near Bury in Lancashire. An only child, her parents were Ernest and Ella Smith (née Furber). Ernest was a bank manager; he died in 1898, when Dorothy was two years old. Dodie and her mother moved to Old Trafford to live with her grandparents. Dorothy's childhood home, known as Kingston House, was at 609 Stretford Road.where she lived with her mother, maternal grandparents, two aunts, and three uncles Today there is a blue plaque on the building, commemorating where Dorothy grew up. The formative years of Dorothy's childhood were spent at this house. But in 1910 Ella remarried and relocated with her new husband and the 14-year-old Dodie to London. In 1914, Dodie entered the Academy (later Royal Academy) of Dramatic Art, and Ella died of breast cancer. During Ella's illness, mother and daughter became followers of Christian Science.

Dodie unsuccessfully pursued a career as an actress. In 1923, she took a job in Heals furniture store in London and became the toy buyer (and a mistress of the chairman, Ambrose Heal). She authored her first play, Autumn Crocus, in 1931 under the pseudonym C.L. Anthony. Its success, and the discovery of her identity by journalists, inspired the newspaper headline, "Shopgirl Writes Play".

She spent most of her years as a writer living in a townhouse in London, where a plaque now commemorates her occupation. In 1939, she married Alec Beesley, another employee at Heal's.

During the 1940s, she and her husband moved to the United States due to legal difficulties with Beesley's stand as a conscientious objector. While living in the U.S. and feeling homesick for England, she wrote her first novel, I Capture the Castle (1948). During the American interlude, the Beesleys became friends with writers Christopher Isherwood, Charles Brackett, and John Van Druten. In Smith's memoirs, she credits Alec with making the suggestion to Van Druten that he adapt Isherwood's Sally Bowles story Goodbye to Berlin into a play (the Van Druten play, I Am A Camera, later became the musical Cabaret). In her memoirs, Smith acknowledges having received writing advice from her friend, the novelist A. J. Cronin.

When Walt Disney approached her, offering to turn her novel into a movie, she agreed and the two shared a fond pen pal relationship. When the film was released, she attended a private viewing and wrote to Disney, commenting how she enjoyed the film and the art style, but was disappointed at the size of her credit. Walt apologized, saying that he was away from the studio at that time in production. As a way to say sorry, Walt sent her some original images of the film. Dodie claimed that her favorite movie frame was Pongo stretched out in front of the window at the start of the film.

Smith died in 1990 after naming Julian Barnes as her literary executor, a job she felt would not be much work. She was cremated. Her ashes were scattered in the wind. Barnes writes of the complicated task in his essay "Literary Executions", revealing among other things how he secured the return of the film rights to I Capture the Castle, which had been held by Disney since 1949. Smith's personal papers are housed in Boston University's Howard Gotlieb Archival Research Center, and include manuscripts, photographs, artwork, and correspondence (including letters from Christopher Isherwood and John Gielgud).

The Hundred and One Dalmatians

Pongo, the canine protagonist of The Hundred and One Dalmatians, was named after Smith's own pet Dalmatian, the first of nine. Smith got the idea for her novel when a friend remarked at her own Dalmatians, "Those dogs would make a lovely fur coat!"

The scene where Mr. Dearly revives a still-born puppy (who would be named The Cadpig) was also based on a similar event where her husband was able to revive a still-born pup of Pongo's litter too.

Dodie Smith with her pet Dalmatian 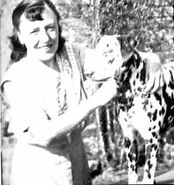 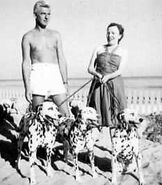 Dodie Smith with the Dalmatians
Community content is available under CC-BY-SA unless otherwise noted.
Advertisement