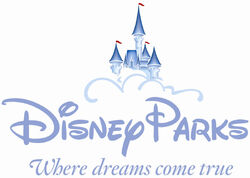 Disney Parks is the segment of The Walt Disney Company that conceives, builds, and manages the company's theme parks and holiday resorts, as well as a variety of additional family-oriented leisure enterprises. It is one of four major business segments of the company, the other three being Consumer Products, Media Networks, and Studio Entertainment.

This is an article discussing a number of Disneyland attractions in which characters or other media from the 101 Dalmatians franchise play a prominent role in it.

Sorcerers of the Magic Kingdom

The Dalmatians help the guests battle Cruella on Main Street USA. Pongo serves as the guests' guide in this quest. Cruella has made a deal with Hades (disguised as Boss Teal: Underworld Crime Boss) to have all the Dalmatians in her possession in exchange for Merlin's magic crystal. Cruella sends Horace and Jasper to catch the dogs for her.

Meanwhile, Pongo calls on the local dogs to help guard the crystal, but are threatened by Horace and Jasper, who start thinking that the dogs are in cahoots with Merlin while driving in their truck and plan on capturing the Dalmatians. The guests stop the duo by destroying their truck using the sorcerer's crest (the symbol on the back of the spell cards).

The guests then go to confront Jasper, who is setting up a trap for the puppies. He, however, spots the guests and tries to subdue them using fireworks, only to have a barrel dumped on him and thn being caugh in his own trap. Merlin then informs the guests that some of the captured puppies are in the local stables and Pongo has gone to help.

Cruella informs Hades that the Dalmatians are guarding the crystal piece and she goes off with Hades to start a fireworks display that will cause a distraction as they steal the crystal. Cruella orders Horace to deal with the dogs. The guests then use the sorcerer's crest to stop Horace and save the Dalmatians.

Cruella, in order to get the crystal, breaks into Merlin's secret Main Street vault by crashing her car through the wall of said vault. The guests battle Cruella, but she still succeeds in getting into the vault. It is revealed that as the guests kept Cruella busy, Perdita and the puppies had just enough time to replace the crystal piece with a pile of chew toys. The park guests, with the help of Pongo and Merlin, defeat Cruella, infuriating Hades once he finds out. Merlin then congratulates the guests and gives them an assignment.

One of the spells in Sorcerers of the Magic Kingdom is "Pongo's Soot Bucket", in which he covers you in soot, which is able to act as a defense from grass attacks.

In the Toontown of Disneyland California, the firehouse is "101 Dalmatians" in theme, with a firehouse number being: "101" and a Dalmatian image on the "101 Engine Company" window. Also, if you ring the doorbell, a Dalmatian pup shall try barking at you from the upper levels.

Cruella's car appears in front of the backlot tour of Disneyland Paris.

On the tour, you can also see Dalmatian pattern taxis, Alonzo's van and the cake Tn, that Cruella fills in for in 102 Dalmatians.

In the Disney Hollywood Studio Park in Florida, there was a "101 Dalmatians" exhibit with sets and props from the "live-action" 101 Dalmatians.

In the ABC sound stage, it is also possible at one point to add sound effects to a scene in 101 Dalmatians: The Series.

The paw prints, of Perdita, are also prss, in frnt of the Chinese Theatre, which acts as the housng for the Great Movie Ride Attraction.

Horace and Jasper's truck is also known to be in the backlot tour of Disney's Hollywood Studio Park in Florida.

There is an interactive mystery adventure on the Disney Cruise Line ships, Disney Dreams! and Disney Fantasy, with one of the cases being "Case of the Missing Puppies".

As they invesitgate, they discover a newspaper showing that Cruella isn't on the ship (in London to attend her trial), so she is innocent in this case.

As they investigate more, they are able to find Lucky and Pepper trying to get a cake on a table; Rolly stuck in the steam vents; Freckles hiding in a cruise hut in the vents; and three Dalmatian pups fighting for a link of sausages.

The culprit is randomized each time, so it can be either The Evil Queen, Maleficent, Yzma, Captain Hook, Dr. Facilier or Jafar (with Cruella's trial showing her innocent). Upon searching their cabin, they find another Dalmatian and chase them to the cargo hold, where they trap them in a cage with Pongo and Perdita finding the Dalmatian puppies.

Mickey congratulates the detectives and asks if they wish to try another case.

When Captain Hook's crew commits mutiny and are about to make him walk the plank, Cruella arrives, stating that in villainy, "You're either in or out," and that while Hook is out, she never is out and hosts a fashion runway show with Dalmatian theme attire she calls "Project Cruella".

She later appears to help Hades find the evil in him so as to help fill the Evil-O-Meter.

An area of the All-Star's Resort at Disney is themed on 101 Dalmatians with large statues of Pongo and Perdita, and a large scale statue of Lucky watching television. The hotel is themed on the Dalmatians, with Dalmatian pups on the rails and a stair in the shape of a fire hydrant with some bone shapes in the area too.