The Dimitri Trio is a group consiting of three male Dalmatian triplets, Dimitri 1, Dimitri 2, and Dimitri 3, that appeared in the TV series, 101 Dalmatian Street.

The Dimitris act much like most of the other pups in the family do - they enjoy playing and having fun and sometimes have small contests with each other.

While they seem identical, the three Dimitris have distinct traits to tell them apart. For starters, each of them has a gold chain collar with a gold number on it that designates which one is which from 1-3.

Dimitri 1 has a round patch spot on his right eye, a black right ear with one spot, and his left hind leg is all black with two white spots. He also has a tattered left ear.

Dimitri 2 has a round patch spot on his left eye, a black ear with 2 white spots that is slightly tattered, and 4 white spots on his hind legs, two on each.

Dimitri 3 has traits from both of his brothers, with four white spots on his hind legs and a tattered right ear. But he also has round patch spots on both his eyes and a black ear with three white spots.

All three of them have a mark on their forehead that resembles a cowlick of hair.

The Dimitris first appeared in a small cameo in the TV music video of the song "In The House". Their first proper appearance in the TV series was in "Winter Funderland" where Dylan passed them on his way to the shower where the boys engaged in a burping contest. They later joined the indoor winter party, flying in the air from a high jump over Dylan's head and crash landing into a pile of snow. 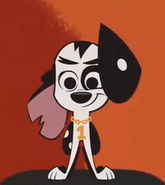 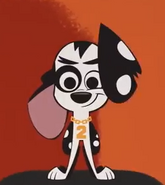 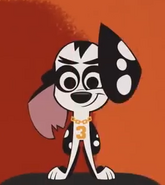 The Dimi-trio laugh after a round of burping