Delgado is a character from the TV series 101 Dalmatian Street. He is one of the puppies of the Dalmatian family.

Delgado is a very energetic and eager pup, capable of running at incredible speeds thanks to his doggie wheelchair which makes him the fastest of his siblings. He often darts about at high speeds and is shown to admire and look up to his older stepsister Dolly. He speaks very quickly and with a strong, lighter pitched British accent.

Delgado is a Dalmatian Puppy with two spots on his left ear, two spots on his forehead and one black patch on his right ear. He has only two visible front legs, with sock-like patterns similar to Dolly. His hind legs are not visible, but the joints are attached to a red dog wheelchair that is secured by his waist. He wears a black collar with a gold dog tag shaped like a yellow road line.

Delgado first appeared in "Boom Night" in the background at the end of the episode, watching the fireworks with his siblings. He is also seen in "Who The Dog Do You Think You Are?" helping Diesel set up the Prince Of Dalmatian Portrait in the Lounge.

His first speaking appearance was in "May Contain Nuts", where he did stunts at the skate park with his family watching. He later tried to impress Dolly by showing her he had mastered a rolling trick, but she was too focused on being with Sid and later hurt his feelings when she ditched him and refused for him to tag along after asking if he can come with her. He is later seen, helping Dylan rescue Dolly from her fall from the Church Tower, getting excited by Dolly about to perform her parkour trick. He & Dolly then run about the House together, after Dylan suggests they play "Poodle Wolf" with him.

In "Snow Day", a rambunctious Delgado is seen zipping around upstairs when Doug is handing out winter hats to the pups and veers straight towards the stairs, flies into the air for a few seconds and then crashes down the stairs, "bowling over" his siblings which gets the glowing cat toy Delilah had to give her kids a medical check up inside Deepak. He is seen lying face first on a stair with his hind wheelchair legs up in the air. He is later seen, in the Episode, being chased by Dolly, so she can put his hat on, with Delgado commenting he doesn't want to as the hats are itchy. 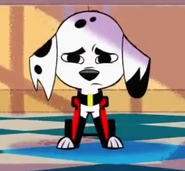 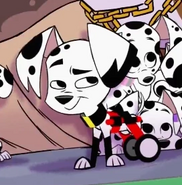