Deepak is one of Doug and Delilah's puppies and a character in 101 Dalmatian Street.

Deepak usually tries to stay calm and collected, often doing spiritual exercises such as yoga and meditation to maintain his calm attitude. However, if something major or mildly stressful happens to him (Ex. getting oozed in shampoo), he goes into a full panic and runs around in an effort to hide in a place where the chaos isn't happening. When in this state, Dylan and Dolly usually have to try to catch him or get him out of his hiding spot and restrain him from running off again until he calms down. Deepak appears to identify more as a feline too, with him meditating to find his Inner-Cat, as well as his Meditation chants sounding like, "Meow-Ow-Ow." Deepak also speaks with a British-Indian accent.

Deepak is a Dalmatian puppy with an asymmetrical pattern of black-and-white fur on his body. The right side of his body is predominantly black. His left front leg and right hind leg are black and his right front leg and left hind leg are white. His tail is all black with a white tip, and his face and hindquarters have a Yin-Yang pattern of black and white. His right ear is black with white spots and his left ear is the opposite. Deepak wears a half-red and half-blue collar on his neck.

Deepak, like most of his siblings, made his first TV appearance in "Boom Night" watching the fireworks with his family, standing next to Dolly.

In the short "Yoga Pups", Deepak tries to meditate on his Yoga mat, only for it to deflate. He gets angry and tosses it out, then sees Dolly napping with her skateboard nearby and takes it from her to continue his mediation. Dolly wakes up and sees her skateboard is gone and tries to get Deepak off of it in various ways such as making loud noises and offering treats and toys. But Deepak is in such a deep meditative state that he is asleep and has blocked out all external stimuli. Dolly accidentally gets her skateboard moving and tries to protect Deepak from various obstacles and from falling off her skateboard. Once Dolly decides to try meditating while airborne with Deepak, he wakes up and calmly walks off the skateboard in midair and onto the top platform of the skating ramp, leaving his sister to go careening down the ramp and crash land. But Dolly is satisfied as she got her skateboard back.

In "Snow Day", Deepak ingests a cat toy after Delgado crashes down the stairs, which Delilah removes via chest compression, though not before he thinks he achieved his "cat-shaped inner light". Later, Dolly accidentally squirts the Triple-D's expensive shampoo on Deepak when she was trying to oil her sled with it. This sends Deepak into panic mode as he slips, slides and bounces around the house with Dylan and Dolly chasing after him. He then gets splattered in kibble and finally stops, burying himself in the couch. When Dylan and Dolly try to tug him out and beg him to come out, Deepak refuses and claims the universe is telling him he will be safe in the couch and goes in deeper. Once freed from the couch and after another freakout, he is tied up in a wool scarf. When Doug and Delilah ask if the kids are ready to go to the park, Deepak says he is not ready spiritually, physically or emotionally. After finding Dorothy, the family goes to the park and Deepak sees his family sledding towards him. He panics and as he tries to run, exclaims, "I should have listened to the universe!" 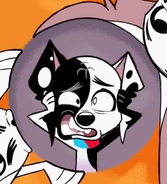 Deepak in the show's opening. 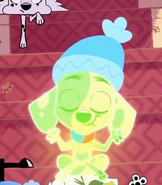 One of Deepak's panic moments.