Danny is a minor character from the 1961 Disney film 101 Dalmatians. He is a brown Great Dane who lives in Hampstead with a smaller zany terrier named Scottie. He was voiced by George Pelling.

Whilst he may not be named in the original novel, a Great Dane is mentioned to be one of the main communicators in the "Twilight Bark." He informs Pongo and Missus that their puppies are being held at Hell Hall in Suffolk.

The Colonel later mentions having contacted the Great Dane, noting that he was a Brigadier General.

When their 15 puppies are stolen by Horace and Jasper, Pongo and Perdita decide to use the Twilight Bark to ask for help from the other dogs of London. Danny is the first one who heard Pongo. He decides to help them and manages to spread the news, and the news reaches to his friend Towser. When he is informed about the puppies location probably from Towser, he calls Pongo and Perdita to tell them the news. They meet at Primrose Hill where Danny informs Pongo and Perdita that their puppies have been located somewhere North, in Suffolk. Danny leads them to Camden Road, giving them instructions to head to Rivermarsh and search for Towser, who will lead them to the Colonel, who will take them to De Vil's palace. When Perdita signals shock at the name "De Vil," Danny questions if it's someone that Pongo and Perdita know, but he gets no answer as Pongo feels there's no time to explain. He wishes Pongo and Perdita good luck and reminds them that if they lose their way, they should contact the "Barking Chain" that is standing by. His help is useful to Pongo and Perdita, as they found their puppies in the end.

He is not seen through the rest of the film, but it can be assumed that he found out that the puppies returned home, and it was Cruella who was behind the dognapping theft.

Danny makes a brief cameo in the sequel during the "Twilight Bark" sequence. Danny is seen with another Great Dane called Tiny, who both overhear a Chihuahua barking from a phone booth and start sending the message across London too.

Their humans appear to be two of the performers whom appear in Mary Poppins during the "Supercalifragilisticexpialidocious" number. 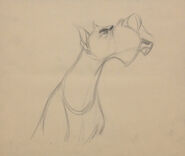 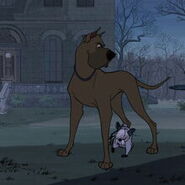 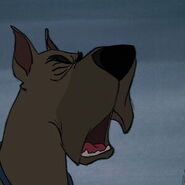