102 Dalmatians: Puppies to the Rescue

View source
watch 01:36
We're Getting Mutants in the MCU - The Loop
Do you like this video?
Play Sound

102 Dalmatians: Puppies to the Rescue is a video game based on the live-action Disney movie 102 Dalmatians. It made its debut in 2000 on the Sega Dreamcast, Sony PlayStation, PC, and Gameboy Color.

The game itself follows the film's storyline loosely. The player can choose the role of one of two Dalmatians: Oddball or Domino, who are out in the backyard looking for treasure. It is not long before the player realizes that a toy found buried in a park was made at one of Cruella de Vil's toy factories; this alludes to the fact that Cruella's toy sales are down, which ultimately leads to the problem in the storyline. Facing financial ruin from lack of sales, Cruella sets an evil plan in motion - to reprogram her toys to capture any pets in sight. Oddball and Domino are the only puppies in their family who have not been captured when they return from the park. Their parents, Dottie and Dipstick, set out to rescue their puppies, commanding Oddball and Domino to stay home and "be good". The puppies do not listen, and are soon out on their biggest adventure yet - to save their brothers and sisters, and their parents who are captured along the way.

Throughout the game, the puppies have to rescue their siblings, fend off Cruella's henchmen, and Cruella herself several times, while navigating through all kinds of terrain, leading up to a final battle at Cruella's toy factory, during which Cruella (and her "dot-com darling", Professor Farzboom) are encased in Farzboom's own creation, "supergloop". Ironically, considering Cruella's plan was to encase all the puppies in this heavy duty glue-like substance to create a line of realistic animal toys. The henchmen end up deserted on an island, and Cruella ends up in a jail cell, still glued to Farzboom.

Over the course of the game, the player has several opportunities to collect "stickers" towards a virtual sticker book which can be accessed through the level menu. Various actions within the game will unlock stickers. Generally, there is a sticker for finding the first checkpoint and exiting every level, collecting 100 bones each level, and rescuing six puppies in each level. Each level has its own individual tasks—completing a chore, defeating a henchmen, solving a puzzle, etc., which will also grant stickers. There are six stickers per a level, excluding Cruella levels, which combine together with mini games for their own sticker image.

Puppies to the Rescue is a three-dimensional game with the ability to angle the camera in whichever direction will make it easiest to navigate for you. The player must bark at toys to short-circuit them, or roll into them to smash them.

Checkpoints within a level are places where the player will be sent back if you lose a life, and are marked by a parrot named Waddlesworth. If the player loses a life and have not reached a checkpoint, you will be sent back to the levels starting point. Unlike the Game Boy Color version of the game, toys the players break stay broken.

Each level has an "animal friend" who will tell the player how to get through the level, and sometimes assign Oddball or Domino specific tasks to do in return for their help. Completing each of the Cruella levels will unlock a mini game to play.

The game also consists of a number of minigames, which are unlockable by progressing through the main gameplay.

As the two main protagonists, Oddball and Domino appear throughout the entire game (depending on which the player chooses, of course). However, Little Dipper doesn't appear in the game, although in the live-action film 102 Dalmatians, he is always seen together with them. Cruella, as always, is the main antagonist of the game together with Horace, Jasper and a new addition to his henchmen: Farzboom. Dottie and Dipstick also make a brief appearance in the beginning, telling the puppies not to follow them and stay out of trouble.

An early demo version of this game appeared on the "PlayStation Demo Disc Version 1.4". The game was shown to have numerous differences in its cutscene. In the demo version, the Dalmatians are referred to by different names: Domino is called Patches (despite having Domino's spot pattern, though lacking his domino tag), Oddball is called Dottie (with the tag on her collar missing as well), and Dipstick is called Pongo.

Based on this, as well as the mother Dalmatian (Dottie in the game, though possibly Perdita in the demo if Dipstick is Pongo) concerned about how their pups are missing again, it can be possible that the game was intended to have been set in the first generation of Dalmatians, rather than in the 102 Dalmatians time frame, but was changed during production to coincide with the release of the 102 Dalmatians film.

The demo also comes with the "Ice Festival" level, though Waddlesworth does not appear at the checkpoints.

With the exception of Domino (who is still referred to by his sister as Oddball in his dialogue) and Crystal the snow bunny, all the other characters are played by placeholder voices.

The rest of the family

Domino and Oddball discussing if they disobey their parents or not

Dottie and Dipstick accusing Cruella that she stole their pups

Dipstick as he appears in the game

Dipstick telling the pups not to get in trouble

"Listening" to their parents

"So do you want to stay here?"

Domino as he appears in game

Dottie telling the pups that she's glad their safe

Waddlesworth as he appears in the game

Domino with Fidget in Regents Park 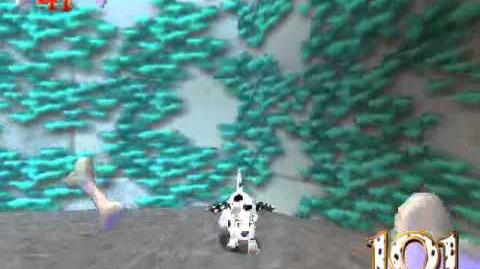