101 Dalmatians II: Patch's London Adventure is an action-adventure/platforming game based on the film of the same name. It was developed by Digital Eclipse Software, Inc. and published by Eidos Interactive for the PlayStation platform. It was released on November 20, 2003.

You are Patch, one of the famous 101 Dalmatians, and your family has accidentally abandoned you in London during a move to the countryside. Roam through the streets and rooftops of London as well as the ponds and fields of the surrounding countryside in your quest to find them. When your brothers and sisters are dognapped by Cruella de Vil, you team up with Patch's favorite TV star Thunderbolt in an effort to rescue them.

Gameplay is fairly basic for a 3-D platformer. In each of the 29 levels you collect a set number of items (bones, snacks, apples, etc.), avoid enemies (cats, squirrels, bobbies, etc., plus Horace, Jasper, and Cruella herself), and rescue your siblings. Patch is able to dig, roll, bark, and jump as he runs through London and the surrounding area. There are some timed bonus rounds (i.e. collect all 60 bones in 45 seconds) every 4 or 5 levels that help give the game more variety.

After each bonus level is a cut scene that consists of a handful of still frames from the movie with accompanying text. Due to these scenes' infrequency, the story can be difficult to understand if the game is not supplemented by watching the movie. 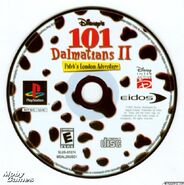 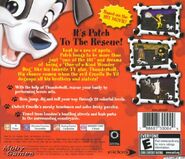 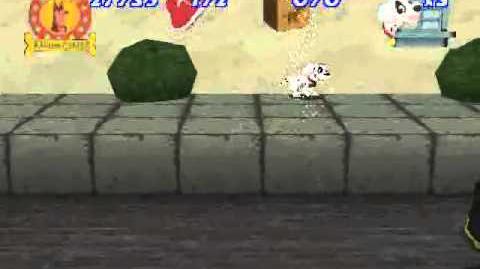